We met Rafael, our guide with his ancient minibus at Bilbao airport.  He took us into the city, where we saw the amazing Richard Sella sculptures at the Guggenheim, where we also bought Ben a 60th birthday T-shirt.  Five of us had a delicious lunch in a lovely restaurant in the Playa de Jado.  Before leaving Bilbao Rafael showed us the famous transporter bridge.  They also have one in Newport and in Middlesbrough. 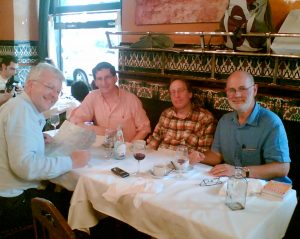 It rained as we drove along the Cantabrian coast, with one stop as the radiator was getting too hot.  We reached Cangues D’Onis by 9.  Lovely old Roman bridge, and a good cheap meal with Barcelona v Espagnol on the TV.

Pouring rain to start, but it soon eased off. On the way to the start of the walk we stopped at Covadonga where the reconquista started over a thousand years ago.  We walked along greenery past a Mirador and Lake Enol in lovely sunny weather. We stopped by ruined huts at Rondialles for a snack and reached Verragonda refuge about 1.30 and continued towards Ordiales.

Rafael showed us how the holes in the Karstic limestone produce great gusts of cold air if you stand in the right place.  Upwards we walked past a refuge hut until we joined Don (who had almost gone over the top) at the col.  A fantastic view of the sheer drop below us and endless mountains to the west.  This was Ordiales with its memorial to the founder of the Picos national park (he had been inspired by Yellowstone).  We saw Cantabrian chamois (rebecos) and a golden eagle.  The clouds that had been massing below caught up with us on the descent.  We rested at Verragonda while the worst of the rain passed.  More rain and gene Kelly impressions in the puddles.  We reached the van at 7 pm.

We drove to our night’s stay at Soto de Sajambre along the gorge of the Sella river; a magnificent switchback ride.  At the small hotel there was a huge meal of a brilliant courgette soup, meatballs and extra helpings of pork.  They had a guitar which John played; and we sampled the tasty local aquavita.  A lovely long day.

Overnight Rafael had driven our stuff to Arenas de Cabrales and then returned by taxi.  An easy start on a sunny day through the lovely Vegabano meadows from where we could see the day’s task – to go right above the tree lien tot eh shoulder of a great mountain.

The walk up was relentless through a wood following a brook.  Don and Huw led the way and eventually the trees thinned out and we pressed on amongst the heather up to the col below the rocky mountain and waited for the others, who emerged from the trees and climbed up.  We walked to a saddle point with stupendous views where we ate our lunch.  There were more rebecos in the distance as we looked down the Valdeon valley – our route for the day; we descended through the Vega de Llos with a herd of cows with a bull.  There were lovely views of the central massif of the Picos with greta sculpted limestone forms.  Eventually we reached the flat path in the valley, passing a herd of cows very close, with another bull. In late afternoon sunshine we saw the horreos of Soto Valdeon.  These are grain stores raised above ground on stones.

At our hotel in Posada Valdeon the beer went down very quickly.  To be followed by an enormous meal – pea soup, beef, creme caramel and cheese, completed by a sloe gin digestive.

After a very filling breakfast we set off in lovely weather and easy walking.  We passed an amazing contraption to catch wolves a passageway of poles leading to a trap which they couldn’t get out of.  We saw an old church which was important in the reconquista and followed a raging river through a limestone gorge.  At Cain we sampled the very dry local cider and lunched on chorizo and jambon.

Then we started the Canis gorge at a bridge with its salmon leap.  The gorge was very narrow to start with but it widened and the path rose to be about 100 feet above the river.  We crossed the gorge on bridges twice.  It was a vertiginous walk but with stunning views. 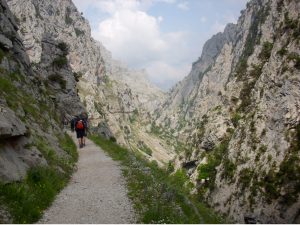 We had a break where the gorge opened out, and then reached the top of the walk and started the descent, which was seriously challenging.  Eventually we reached the road to Poncebos and enjoyed a beer at the bar.  We rejoined the minibus and Rafael drove us to our hotel in Arenas de Cabrales.

We toasted Ben’s 60th birthday and had another huge feast of a meal, rounded off by the famous pungent Cabrales cheese.

We took a taxi from Cabrales to the bar at Poncebos for the start of today’s walk, initially to the hill village of Bulnes.  Richard and Gordon took the new EU-funded funicular to Bulnes while the rest of us walked the mule path, until the funicular the only route to eh village.  This was a hard slog on a stony track following a river but we reached Bulnes after just over an hour.  We stopped in the only bar and shared our bread with a hiking couple who had expected to find a shop there.

We set off for the col at Padebano along a steep rocky path passing a collection of shepherds’ refuges.  We lunched just before the col in the shelter of some buildings and, through a gap in the clouds we saw El Naranjo de Bulnes – the highest peak in the Picos.  At the saddle we could see Sotres way below and miles away.  It was an easy pleasant descent down a switchbacking path to the bottom of the valley then a short, steep ascent into Sotres.  In the bar we saw a newspaper report that Asturias had just voted Bob Dylan as their number one cultural icon ahead of Maria Joao Pires the pianist, Frank Gehry the architect and Andrew Lloyd Webber.  Another big meal finished off by a glass of orojo.

Breakfast included a chat with a seriously boring walker (christened Dick head by John) and we walked on the road in fitful sunshine and occasional rain. We reached a bleak col called Escarandi where Richard and Gordon took the miners’ road to Beges while the rest took the road to Tresviso, following the valley of the river Sobra.  The rain really started and at Tresviso we sheltered and had lunch while Rafael went to fetch the van and pick up Richard and Gordon at Beges

After a coffee in the local bar the rest of us set off in mist passing a large herd of goats until, as the mist cleared we reached the terrifying downward path from Tresviso, a winding path on a precipitous hill with 44 hairpins.

Eventually we saw Richard and Gordon waiting for us by the bridge over the Urdon and a short walk took us to the van at a power station, We drove to Potes where we stayed for the next two nights. It was a nice touristy town and we dined on the terrace with a view overlooking the river.

We drove to Fuente De where we got the cable car to El Cable, at 1834m.  It was a lot cooler with easy walking to begin with.  The path was rough bu 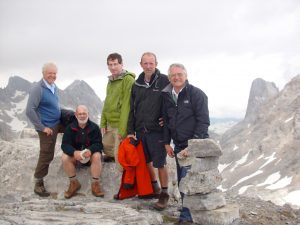 t sloped gently past small glacial lakes and amongst high mountains, all in lovely sunshine.  We traversed some snowy parts as the path got more difficult, narrower and bedevilled by scree which gave way.  Don, John, Richard and Huw who were ahead of the others reached a point where the path was not at all obvious and while we were deciding what to do Rafael cam running up in some distress to tell us we had gone the wrong way, and had to turn back.  There was no option but to traverse the awful steep scree and join the others.    We now walked on toward Cabana Veronica through alternating snow and scree gaining height all the time.  We crossed the snowfields to the col of Horcados Rojos to be rewarded by a superb view of Naranjo Bulnes in the sun.

Five of the group then climbed the Torre de Horcados Rojos (2506m) with Rafael, scrambling up the steep slope to the summit which required some climbing.  We were terrified and elated as we took
photos.

Down the steep, rocky path and we were back at the col in no time.

We set off down through the snow until we found a nice spot for our lunch – of bread, chorizo, apple and orange juice.  We reached the fork for the fields of Avila and walked the easy path through landscape reminiscent of Wales or Yorkshire with pastures full of animals – sheep, horse, cattle, soon reaching Invernales where the animals spend the winter,.     The path was now steep through pleasant woods and eventually we reached Espinama in just over 2 hours – Rafael had estimated the walk as at least 2 ½.  After a celebratory beer in the bar we returned to Potes and our final meal. 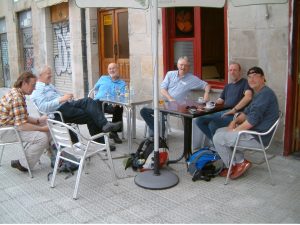 The following day Rafael drove us back to Bilbao airport, which the van only just made having had to stop to fill up the radiator.  His planning of the week was exemplary but he needs a new van!

The Silver Striders is a blokes walking group in South Canterbury, Kent. We are a bunch of friends who are over 60 and who walk between 10 and 20 miles, once a week, usually on Thursdays, and hopefully have lunch at a suitably place cafe or pub. Sometimes we take a packed lunch if the weather looks promising.